I have a confession to make – I used to never give chocolate mousse the time of day.  Whenever I saw it on a dessert menu I could barely muster a passing glance.  I never considered actually ordering it, especially if any sort of creative non-chocolate dessert was on the menu.  But, ever since Matt and Bridget shared what can only be referred to as a vat of chocolate mousse, designed to be consumed by two, at La Bicyclette in Carmel, I have been day dreaming about this once overlooked dessert.  After protesting at first, I was prevailed upon to give the chocolate mousse a taste.  It was heaven – light and airy, voluptuous and perfectly chocolate-y, but not too sweet.  I of course had tasted chocolate mousse before, but until that moment, I had never really understood chocolate mousse.  I love that about food – you think {at least by my age} that you know what you like and dislike, and then something you totally underestimate or write off blows your taste buds away and humbles you.

I knew that chocolate mousse would have to be the final element of my bistro inspired Valentine’s Day meal.  But as I have a penchant for not leaving well enough alone, I decided to pay homage to one of my favorite movies, Chocolat, by including a little spice courtesy of cinnamon and a pinch of cayenne {similar to what I did here} – not very much, just enough to give it some warmth and depth of flavor.  Top with a simple whipped cream and shaved chocolate and you are sure to fall in love with chocolate mousse all over again, just like I did.  Have a lovely Valentine’s Day!

Recipe continued after the jump… 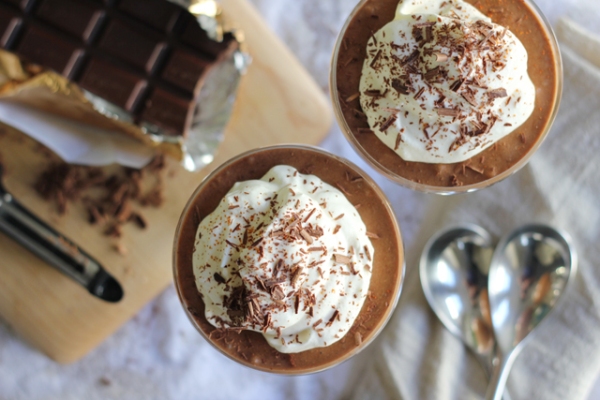 Adapted from David Lebovitz, which was adapted from Mastering the Art of French Cooking by Julia Child

Heat a saucepan one-third full with hot water, and in a bowl set on top, melt together the chocolate, butter and coffee, stirring over the barely simmering water, until smooth.  Remove from heat and whisk in cinnamon and cayenne pepper.

Fill a large bowl with ice water and set aside.  In a bowl large enough to nest securely on the saucepan of simmering water, whisk the yolks of the eggs with the 2/3 cup of sugar and water for about 3 minutes until the mixture is thick, like runny mayonnaise.  {You can also use a handheld electric mixer.}

Remove from heat and place the bowl of whipped egg yolks within the bowl of ice water and beat until cool and thick.  Then fold the chocolate mixture into the egg yolks.

In a separate bowl, beat the egg whites with the salt until frothy {I used a KitchenAid, but you could also use a hand held mixer}. Continue to beat until they start to hold their shape.  Whip in the tablespoon of sugar and continue to beat until thick and shiny, but not completely stiff, then the vanilla.  Fold one-third of the beaten egg whites into the chocolate mixture, then fold in the remainder of the whites just until incorporated, but don’t overdo it or the mousse will lose volume.

Transfer the mousse to a serving bowl or divide into serving dishes, and refrigerate for at least 4 hours, until firm.  In a separate bowl, whisk heavy cream until soft peaks form, then add sugar and continue to whisk until desired consistency is reached {don’t over-whisk}.  Dollop whipped cream over chilled mousse and, using a vegetable peeler, shave chocolate over whipped cream.  If desired, sprinkle a very small amount of cayenne pepper on top. 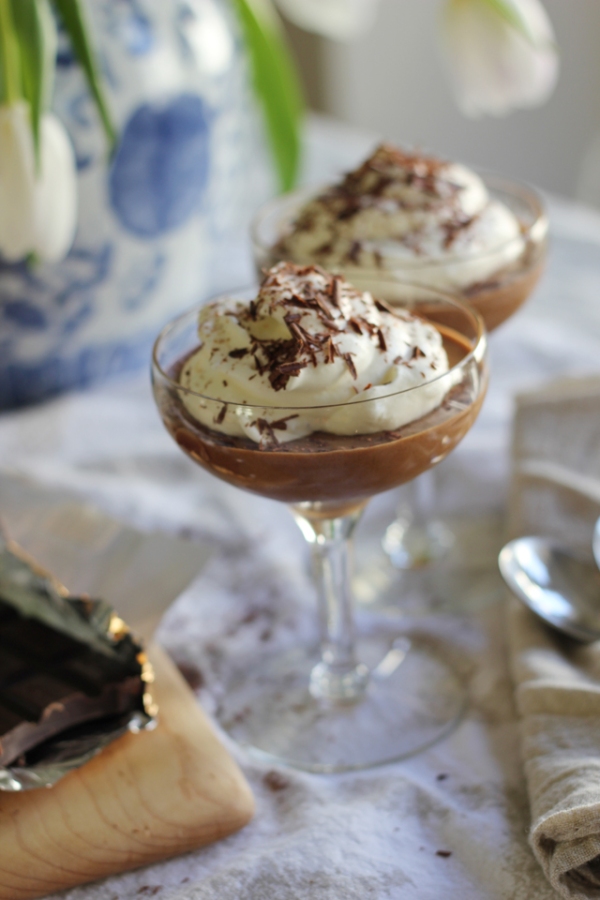 This entry was posted in desserts + baking, Recipes. Bookmark the permalink.