cronuts – worth the hype?

Posted on September 5, 2013 by fleurdeselsf 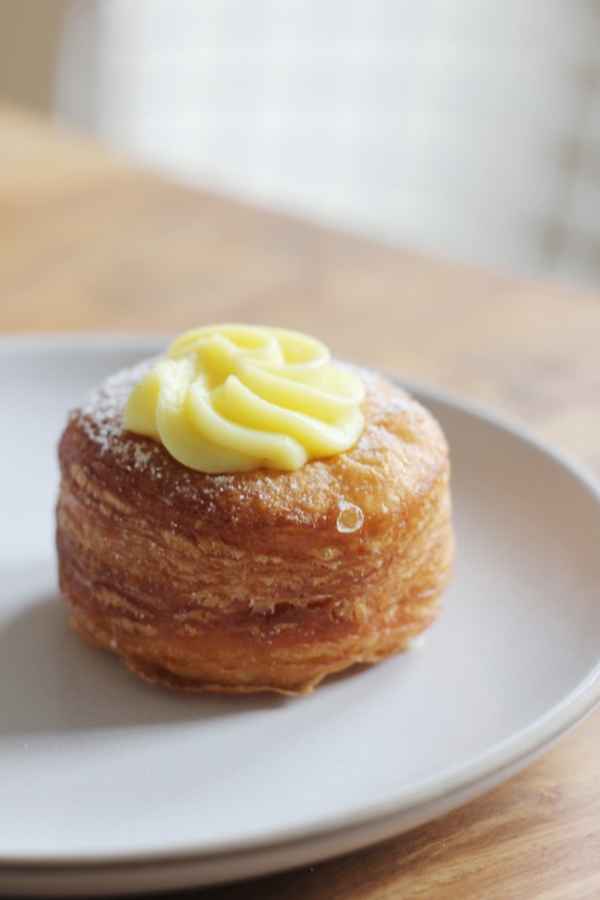 Cronuts seem to be everywhere. Originally dreamed up in a kitchen in New York, I cannot visit some of my favorite blogs without being inundated with pictures of this bizarre little love child of a croissant and a donut. After reading this refinery 29 article, I discovered that one of the few bakeries producing these delicacies in San Francisco was literally down the street at Fillmore Bakeshop. Given the proximity, I just had to investigate. Fillmore Bakeshop is quite regimented in its cronut distribution – it offers cronuts for sale only on Saturdays between 9 and 10 am. One Saturday morning, I dragged Matt and Layla down the street to the bakery, and we were astounded to see a line about 30 people deep in front of the bakery {all of whom were roughly our age and likely refinery 29 readers}. Strangely, this enthusiasm piqued my interest even more, and we got in line. When we finally got to the front, we were offered two choices – the custard filled or the cinnamon sugar.  We got 2 of each {the maximum per order} and quickly squirreled them away to devour them in the privacy of our home. They were still warm, and deliciously flaky – the layers of buttery flakiness were indeed very much like a croissant, with a pull-apart texture that was reminiscent of morning buns. I think I had a slight preference for the cinnamon sugar {not pictured}, which was rolled in a mixture of cinnamon sugar immediately after coming out of the hot oil. The verdict? Cronuts were a delicious little experience, although I must say that the thought of that much butter boiling away in a vat of fat isn’t the most pleasant, and I think it would ultimately haunt my ability to consume these on any sort of regular basis. And, perhaps this is blasphemy, but I would take a well-made, buttery, golden brown croissant over a cronut any day. Worth a try? Absolutely, but not the hysteria.

This entry was posted in Random Notes. Bookmark the permalink.

12 Responses to cronuts – worth the hype?